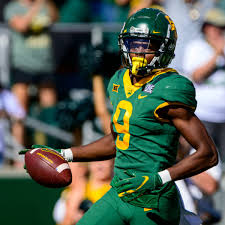 The wide receivers showed off their speed Thursday as the NFL scouting combine opened in Indianapolis. Baylor prospect Tyquan Thornton stood out from the group and nearly set a combine record.

Thornton clocked an official time of 4.28 seconds in the 40-yard dash. Initially, his time was announced as 4.21 seconds, which would have set a combined record for the fastest 40-yard dash, breaking Washington receiver John Ross III’s mark of 4.22 seconds from 2017.

He unofficially held the record for just over two hours after his time was first posted. The NFL later announced 4.28 seconds as Thornton’s official time.

Thornton was Baylor’s leading receiver as a senior in 2021, with 62 catches for 948 yards and 10 touchdowns.

NFL.com lists him as a possible Day 3 pick in the upcoming 2022 draft. This year’s draft will take place in Las Vegas on April 28-30. 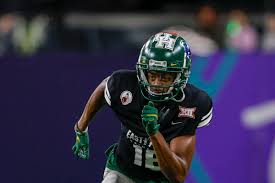 The Ohio State tandem, No. 1 and No. 5 wide receiver prospects of Garrett Wilson and Chris Olev, according to The Athletics Dan Bruegler, clocked in at 4.38 and 4.39, respectively, at roughly the same exact time.