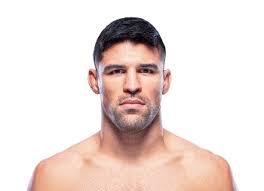 Vicente Catta Preta Luque is an American-born Brazilian professional mixed martial artist. Luque currently competes in the welterweight division of the Ultimate Fighting Championship. As of April 12, 2022, he is #5 in the UFC welterweight rankings.

Luque was born in Westwood, New Jersey, on November 27, 1991, to a Brazilian mother and a Chilean father.

Her maternal grandmother was a diplomat, and as a result, her mother was raised mostly in Chile, where she met and married her father before relocating to the United States.

Luque was raised trilingual, speaking Portuguese, Spanish and English. Luke began training in various forms of martial arts as a youth, initially as karate at the age of three. When Vicente was six years old, his parents separated and he moved to Brazil with his mother.

Luke made his professional mixed martial arts debut in June 2009. He set a 7–4–1 record, competing for various regional promotions in Brazil before trying out for The Ultimate Fighter in early 2014.

In February 2015, it was announced that Luke was one of the chosen fighters in The Ultimate Fighter: American Top Team vs. Blackzillions.

In his first fight on the show, Luke faced Nathan Coe. He won the fight by submission in the second round. Luke faced Haider Hassan in the semi-finals. He lost the battle via split decision. 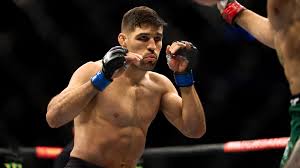 His parents separated when Vicente was six years old, and he moved with his mother to Brazil, where he continued to train in karate until the age of ten.

After a spell with football, he began training in Muay Thai and Brazilian Jiu-Jitsu as a teenager before switching to mixed martial arts in 2008. In 2021, he was promoted to a black belt in both Brazilian Jiu Jitsu and Luta Livre on the same day.

Luque has already amassed an impressive $2million net worth. This is, of course, almost entirely due to his career inside the UFC octagon.

He is currently in the best form of his career. Luque has lost just once in his last 9 fights and that was against Stephen Thompson at UFC 244.