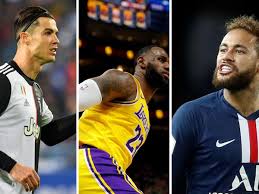 Athletes are idolised by billions of people throughout the world. They are ecstatic to learn about every single update that athletes share with them, particularly on Twitter.

Athletes make a difference in our lives by demonstrating their commitment to hard work, entertaining us on the field, and leading a healthy lifestyle. There is no greater reason for athletes to be adored and admired all across the world.

Every athlete is valuable, but there are a select few who have a sizable fan base. As a result, an athlete with a huge Twitter following has been rated according to the number of followers they have.

Cristiano Ronaldo is a Portuguese professional footballer who plays forward for Manchester United in the English Premier League and captains the Portugal national team.

He’s the one who controls the show and competes with the standers. CR7’s Twitter account now has 93.4 million followers. Cristiano Ronaldo is a five-time Ballon d’Or winner and the FIFPro World Player of the Year.

Cristiano Ronaldo, sometimes known as the “Unstoppable Machine,” is now the most followed athlete on Twitter.

Neymar Jr is a Brazilian professional footballer who plays forward for Paris Saint-Germain, a Ligue 1 club and one of the wealthiest clubs in the world, as well as the Brazil national team.

Neymar, who has 54.4 million Twitter followers and is known for his quickness, speed, dribbling, finishing, and skill with both feet, gets a lot of money from sponsorships for his social media accounts.

Neymar, widely recognised as one of the finest players in the world, has won numerous trophies, including the UEFA Champions League and La Liga Player of the Month, earning him the admiration and respect of football fans all over the world.

LeBron Raymone James Sr is a professional basketball player with the Los Angeles Lakers of the National Basketball Association. He is frequently referred to as one of the greatest NBA players of all time.

LeBron James is commonly regarded as one of the highest-paid sportsmen in the world, having earned more than $1 billion over the course of his 18-year career.

He is the wealthiest and most gifted basketball player in history. He has won numerous trophies, including NBA champion, NBA Finals MVP, and four times NBA Most Valuable Player. As a result, he receives intent from all of his social media platforms, particularly Twitter, where he has 56.1 million followers.

Sachin Tendulkar, widely regarded as one of the greatest cricketers of all time, began his career with the Indian national team in 1989. Since then, he has remained one of the most imposing forces in Indian cricket till his retirement.

Throughout his career, he has won numerous cups. He was also named Wisden Cricketer of the Year, Wisden Leading Cricketer in the World, and received the Padma Shri, India’s highest civilian accolade.

His massive scores of 18,426 runs in one-day internationals and 15,921 runs in test matches made his country and fans proud. That is why he has a big fan base on Twitter, with 35.8 million followers.

Ricardo Izecson dos Santos Leite, a retired professional footballer from Brazil, played as an attacking midfielder. Kaka, as he is called, began his football career in 2001 with the Sao Paulo squad.

He is the first athlete in history to have a Twitter account with ten million followers. He currently has 29.2 million Twitter followers, many of whom are ardent fans eager to see what he is up to. They respond to all of his posts as well.

Kaka is well-known for his attractiveness and good looks, which contributes to his popularity among football fans. He is still regarded as one of the most attractive footballers of all time, even after his retirement.

The La Liga Best Midfielder award winner has a big fan base across all social media platforms, with 25.1 million followers on Twitter who are extremely supportive and eager to see his updates.

His versatility and keen vision have earned him millions of followers around the world, which is why he is ranked sixth among the top ten most followed athletes on Twitter.

Ronaldinho, as he is known, spent most of his career as an offensive midfielder, earning him accolades and a global fan base of 20.1 million on Twitter.

Ronaldinho has a warm personality and a bright smile on his face. He uses Twitter to share his beautiful moments and his struggle to be better than he was in the past, which inspires and thrills his fans.

Gerard Pique is a Spanish professional footballer who plays as a center-back for Barcelona in La Liga. Widely regarded as the best defender of his time, he began his career in 2004 at Barcelona, where he spent four seasons before retiring in 2008.

On all of his social media sites, including Facebook, Instagram, and Twitter, he has a sizable fan base. His girlfriend, Colombian singer Shakira, is also well-known.

Gerard, without a doubt, is one of the most attractive athletes with deep blue eyes, and he is deserving of his 20 million Twitter followers.

Kevin Durant is a professional basketball player from the United States who now plays for the NBA’s Brooklyn Nets. His career began at a young age in college in 2006, and he is affectionately known as KD.

Basketball fans are usually enthralled by his popularity and distinctive playing style. That is why, with 19.2 million followers on Twitter, he is the most followed basketball player.

He has a large social media following as a result of his vision and remarkable talents, which have made football fans enamoured with him. He is also one of the most prolific scorers in Premier League history.

Fans adore anything he posts on social media, particularly on Twitter, which is why Rooney has 17.2 million followers.