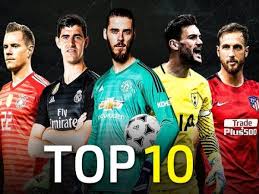 Lev Yashin was a fiercely passionate goalkeeper with amazing reflexes and jaw-dropping athleticism. Four years after helping the USSR to Olympic gold, he was part of the team that won the 1960 European Championships.

Peter Schmeichel’s impressive figure among the sticks was a major reason for Manchester United’s dominance in the 90s. Before that, however, he was a success at Brndby, helping them to four league titles and a Danish Cup.

He was praised internationally throughout the 1992 European Championships as his performance helped Denmark surprise everyone by winning the tournament. With United, Schmeichel won five Premier League titles, three FA Cups, one League Cup and one Champions League title.

Banks will always be remembered for that save against Pele in the 1970 World Cup. Although his career was not filled with trophies, his quality during his career was recognized as the best in the world.

He has the unique distinction of being the only English goalkeeper to win a World Cup. His career came to a premature end when he lost his right eye sight after a car accident. He tried to continue but was never the same player again.

He also won the West German Footballer of the Year award three times. Much of his success was due to his consistency and good health. Between 1966 and 1977, he played 422 matches in a row. That’s 11 years without missing a game.

Zoff is the oldest player to win a World Cup, having done so at the age of 40, while still captaining the Italian team. He once went 1142 minutes without a loss in international tournaments, a record that stands to this day.

His 112 Italy caps is the third highest ever and includes success at the 1968 European Championships, in addition to the 1982 World Cup mentioned earlier. At club level they won six Serie A titles, two Italian Cups and one UEFA Cup. 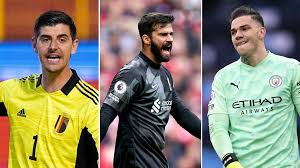 Oliver Kahn is one of the most decorated German players of all-time, and it’s no coincidence that wherever he went, he won trophies and accolades. While at Bayern Munich, Kahn won eight Bundesliga titles, six German Cups, six League Cups, a UEFA Cup, and a Champions League.

The story of success continued with the national team. His 86 caps included being part of the team that won Euro ’96. Individually, he has been named German Footballer of the Year twice, IFFHS Best Goalkeeper three times, and Best Bundesliga Goalkeeper seven times.

Shilton enjoyed a career spanning 31 years, playing 1005 league games and 1237 games in total, more than any other player. He was 47 when he hung up his shoes. He set a record 125 times for England despite competition from the likes of Banks and Ray Clemens throughout his career.

Shilton was part of Brian Clough’s all-conquering Nottingham Forest side, and won one league title, one League Cup and two European Cups. Individually, he was named the PFA Player’s Player of the Year in 1978.

During his club career he has won the UEFA Cup, the Italian Cup and two Serie A titles. However, his biggest achievements have come at the international level where he currently holds 90 caps and is a World Cup winner.

Individually, Buffon has been named as the Serie A goalkeeper seven times, and as the IFFHS best goalkeeper four times, more than any other ‘keeper’.

Pat Jennings played over 1,000 top-level games in his 22-year career, and is Northern Ireland’s highest-capped player with 119 appearances.

Throughout his career, Trautmann not only had to compete with opposition strikers, but also endured endless taunts from the rooftops, being in the German Army during World War II. After the war he settled in England and started playing football.

It says something to the quality of his performances that he was eventually accepted and even accepted by some fans, especially Manchester City fans, where he became a legend.