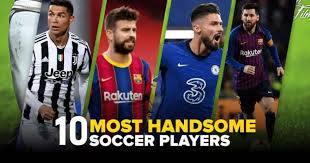 Soccer may be known as a beautiful game, but it’s also a sport that has produced some seriously handsome players. In this article, we will be introducing you to the top 10 most handsome soccer players in 2023.

From household names to up-and-coming stars, these players have not only proven themselves on the field but also caught the attention of fans with their good looks. So if you’re ready to check out some of the hottest soccer players in the world, keep reading to find out more!

Olivier Giroud is a French professional footballer who plays for his national football team and as a forward for FC Milan, one of the most popular football clubs in the world. In the past, during 2012–18 he has been playing for another Premier League club Arsenal FC.

Olivier Giroud is popular for his charming personality and charming looks. Above all, the color of his eyes adds to his personality even more. He was the crush of many beautiful girls but he found love only from his wife Jennifer Giroud.

Lionel Messi plays for the Argentina national football team and the French football club PSG. Apart from his greatness as a footballer, Messi has a charming and dominant personality which made him one of the most handsome footballers in the world.

Throughout his career, he played for FC Barcelona before leaving the club in 2021. In Messi’s personal life, he also seems to be a single lover. Antonella Roccuzzo is the only woman he loved and married since childhood.

Neymar Jr. is one of the most popular footballers on the planet. He is a professional footballer from Brazil whose looks are beautiful and attractive. Neymar is now 28 years old and has become a worldwide popular celebrity.

The Brazilian winger also plays for PSG Football Club. Neymar rose to fame in the past when he was in FC Barcelona. His transfer to PSG was one of the most expensive football transfers in history. Neymar has a beautiful child, Davy Lucca da Silva Santos.

Pique’s professional career was mostly spent with FC Barcelona and he captained the club for years. Her beauty and amazing personality is the reason for her fame among beautiful girls all over the world.

Ronaldo is one of the greatest footballers in the history of football. The winner of Euro 2016 has already achieved many milestones in his career. Ronaldo is now one of the most title-winning athletes in the world.

Why is he on this list? Not because of his greatness as a professional, but because of his charming personality and handsome looks. Ronaldo is the most liked and most followed celebrity in the world. 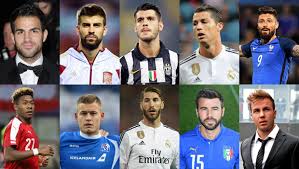 A handsome look like James is every girl’s dream. But some luck gets love from them. James Rodriguez’s girlfriend is Daniela Ospina.

Arkadiusz Milik is a Polish professional footballer who plays for Ligue 1 football club Marseille FC. The 26-year-old football player has an attractive appearance and a handsome personality.

He is currently one of the most handsome footballers in the world. Arkadiusz Milik is married to Jessica Ziolek who is a beautiful and supportive woman.

The reason for her presence in this list is because of her charming personality and dashing style. Keita Balde’s girlfriend is Simona Guatieri.

Isco is a Spanish professional footballer who plays for Real Madrid FC and the Spanish national football team. One of the most stylish and handsome footballers in the world, Isco is widely regarded as one of the best attacking midfielders in his team.

He has changed many hairstyles in the past. His handsome looks made him one of the most attractive soccer players in the world at the moment. Isco is dating Sara Salamo.

Eden Hazard is a Belgian professional footballer who plays for the Spanish football club Real Madrid. The blue-eyed footballer has a personality and a charming look.

Hazard played for Premier League club Chelsea for a long time. His transfer to Real Madrid FC was one of the most expensive and famous football transfers in history. Eden Hazard is married to Natacha Van Honnaker.

In conclusion, soccer is a sport that has produced some truly handsome players. From household names to up-and-coming stars, these players have not only proven themselves on the field, but also caught the attention of fans with their good looks. Whether you’re a die-hard soccer fan or just appreciate a handsome face, these top 10 most handsome soccer players are definitely worth checking out.