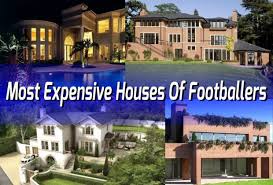 Football stars are paid heavily for their talent and performance. Their popularity and marketability earns them huge amounts of money through sponsorship deals and lucrative contracts.

The footballer with the most expensive house is David Beckham who has a luxurious base in London.

A former Manchester United player and legend, Beckham bought the home back in 2013 for £31.5 million and has gone on to renovate it worth £8 million. Neighbors include Simon Cowell, Robbie Williams, and more.

Wayne Rooney’s sprawling mansion in Cheshire is laden with luxury. The latest addition to the property is an artificial football pitch that also has a seating area.

Apart from this, the house also has two artificial lakes, a swimming pool and a home cinema. The house is also so expensive because it was built from scratch.

The list again includes Kaka, who owns a luxurious mansion in Madrid, where former teammate Ronaldo lived. Located in the exclusive La Finca area, the mansion is valued at around £9 million.

He purchased the property before moving to MLS and has since rented it out to several high-profile footballers, including Gareth Bale.

When Cristiano Ronaldo moved to Juventus FC, he needed a residence suitable for a king. His property in Turin is just that, consisting of two villas to form one huge plush pad.

Among the countless amenities, it includes a state-of-the-art gym, swimming pool, and a football pitch.

Lionel Messi’s not-so-humble Barcelona pad comes with a plethora of comforts. The property is in the elite Castelldefels neighbourhood, which is a very calm setting for the six-time Ballon d’Or winner.

The property, which is close to the Camp Nou, includes a small football pitch, a swimming pool, and other amenities. 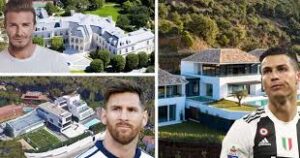 His mansion in a particularly posh area of ​​Greater Manchester has six bedrooms, an indoor swimming pool and a theater, along with other luxuries.

John Terry’s mansion in Surrey, which he bought from Colin Montgomerie, is worth roughly £5 million.

He paid a little less than five million pounds for the property, but has subsequently added an astro-turf pitch, enhancing its worth.

The cost of the mansion is in the region of £4-5 million and includes a swimming pool, tennis court and many other luxuries.

Since making his move to Tottenham Hotspur from Real Madrid CF, Gareth Bale has been living in a mansion in north London.

The property cost around £4 million which also houses a golf course, a sport close to the Welshman’s heart.

Brazilian superstar and former Real Madrid player Kaka recently bought a mansion in Orlando. The property, costing in the region of £2.5 – 3 million, is located in a posh neighborhood of Isleworth.

Figures such as Shaquille O’Neill and more also reside in Isleworth, which is known for its long stretches of shoreline along the lake.