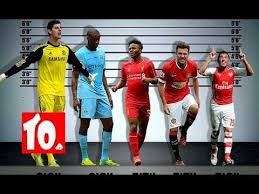 Height can be an advantage in soccer, especially for players who play as defenders or goalkeepers. In this article, we will be introducing you to the top 10 tallest soccer players in the world. These players tower over their opponents and use their height to their advantage on the field.

So if you’re a fan of towering defenders or towering forwards, keep reading to find out more about the tallest players in the game!

2. Paul Millar (2.08m/6ft10in) – In addition to being a footballer, he is also a full-time firefighter at the RAF Kinloss based in Moray, Scotland.

4. Yang Changpeng (2.05m/6ft8in) – He currently plays in the Chinese Super League for Henan Jianye. The Chinese soccer star, who stands at 6 feet and 8 inches tall, is the world’s fourth-tallest footballer.

6. Lacina Traore (2.03m/6ft8in) – Traore was the tallest soccer player in the Premier League while playing for Everton. Traoré’s 6 ft 8in the frame has earned him the nicknames “Gentle Giant” and “The Big Tree.”

7. Costel Fane Pantilimon (2.03m/6ft8in) – During his time with City, Costel became the Premier League’s tallest soccer player. He then played for Sunderland after leaving the Sky Blues.

10. Yvind Hoas (2.03m/6ft8in) – In addition to his club appearances, Hoas also represented Norway at the under-21 level. He is one of the world’s tallest soccer players, standing at 6 feet and 8 inches.

In conclusion, height can be a valuable asset in soccer, especially for defenders and goalkeepers. The players on this list have used their impressive stature to their advantage on the field, standing tall and commanding their area of the pitch. Whether you’re a fan of towering defenders or forwards, these top 10 tallest soccer players are certainly worth keeping an eye on.