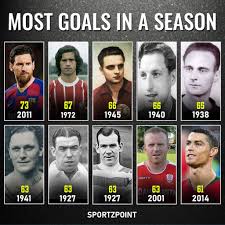 Football is a sport that goes back hundreds of years in history. Records have been set which cannot be ignored. In this article we look at the players who set new records in a single season with their goal-scoring abilities.

Top 10 Footballers With The Most Goals in a Single Season

One of the best in this era and a successful footballer is number 10 in this list. Cristiano Ronaldo scored 61 goals in the 2014–15 season, 48 of which came in the league. However, 10 of his goals came in the international arena. He also won the Golden Boot that season.

Marc Lloyd Williams is a Welsh former footballer. He is also the Welsh Premier League’s all-time top scorer, with 319 goals. He scored 63 goals for Bangor City in the 2001-02 season. Williams scored 47 goals on the league stage. However, he failed to win the golden boot.

James Edward McGarry was a Scottish international football player who played for Celtic and Clydebank as a forward. He then managed Kilmarnock, before returning to Celtic as manager after the end of World War II. Jimmy’s name is on the list after scoring 63 goals for Celtic in the 1927–28 season. He also won the Golden Boot for his brilliant goal-scoring season.

William Ralph “Dixie” Dean was an English footballer who played as a center forward. He is considered one of the greatest centre-forwards of his generation and was inducted into the English Football Hall of Fame in 2002.

He also scored 63 goals in the 1927–28 season, however, his 60 goals came in the league. Everton and the others came in 3 cup games. Dixie was also a Golden Boot winner that season.

Josef “Pepi” Beacon was an Austrian-Czech professional footballer who played as a striker. According to the Rec.Sport.Soccer Statistics Foundation (RSSSF), he is the second-highest goalscorer in official matches in recorded history, having scored over 948 goals in 621 matches.

FIFA recognizes at least a total of 805 goals. He scored 63 goals for Slavia Prague in the 1941–42 season. Beacon scored 45 league goals and 18 cup goals and was also the winner of the Golden Boot.

Gyula Zsengeler was a Hungarian footballer who played as a striker. A legend of Ujest FC, he is most famous for his part in leading the Hungarian national team to the 1938 World Cup final. He was the second highest scorer in that tournament, behind Leonidas of Brazil.

Meanwhile, he had a stellar club season after a stellar international season. He scored 65 goals in the 1938–39 season with 56 club goals and 9 goals for Hungary. He also won the Golden Boot that season.

Arthur Tuor Albert Seulers was a Belgian footballer who played for Beerschot VAC as a striker. He scored 66 goals in the 1940–41 season with just 15 goals in the league and the remaining 51 goals came in other competitions. He also won the Golden Boot for his goal scoring numbers that season. 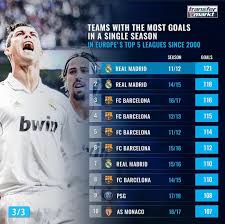 Ferenc Deak was a Hungarian footballer who played as a striker for teams such as Szentlerinci AC, Ferencváros and Budapesti Dojsa. Scored more than 794 goals during his career, most of which came during WWII, Deak is the fourth top goalscorer of all time. He scored 66 goals in the 1945–46 season and jointly booked his spot at No. 4 in the list of most goalscorers in a season. He also won the Golden Boot that season.

Gerhard “Gerd” Müller is a German former professional footballer. A prolific striker renowned for his clinical sophistication, especially in and around the six-yard box. He is widely regarded as one of the greatest goalscorers in the history of the game. He scored 67 goals for Bayern Munich and Germany in the 1972–73 season. Müller scored 36 league goals and 19 goals in other competitions. In addition, he scored 12 goals for the German national team. However, he did not win the Golden Boot Award that season.

In the 2011–12 season, Lionel Messi became the highest goalscorer in a season for Barcelona with 73 goals. He surpassed Gerd Müller’s score of 67 goals from the 1972–73 season. Messi also scored 14 goals in the international arena and became the highest goalscorer in a calendar year with 91 goals. Cristiano Ronaldo and Lionel Messi have both scored 55 or more goals each at least three times in a club season. Lionel Messi also won the Golden Boot Award for his brilliant goal in that season.