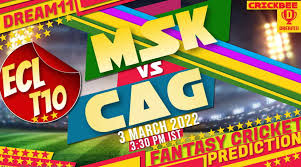 MSK vs CAG: The Group D Eliminator 1 of European Cricket League (ECL) T10, 2022 will be played between Malta Super Kings and Calpe Giants at the Cartama Oval, in Cartama on Thursday, March 3 at 3:30 PM IST onwards.

The European Cricket League T10 2022 Group D Eliminator 1 will be streamed live on the Fan Code app and website.

The Group D Eliminator 1 contest will be hosted at the Cartama Oval, in Cartama, Spain on Thursday, March 3. The game will commence at 3:30 PM IST onwards.

The upcoming Eliminator 1 match will be a do or die match for both the sides, so they will want to give their best to win the game and survive in the competition.

Iain Latin has amassed 63 runs at a strike rate of 153.65 in addition to taking one wicket.

Varun Prasath has been in good form with the willow, scoring 130 runs at a strike rate of 245.28.

Amar Sharma is yet to fire on the batting front in the ECL T10, but he has been in excellent form with the ball. He has picked up six wickets in thr competition.

Ashok Bishnoi has been in fine bowling form, returning with seven wickets at an economy rate of 7.22.

In the end the Super Kings registered their first win of the tournament and in some style. After posting a mammoth score of 172 for 2 in the first innings, the Super Kings stepped in to defend the score with their tail up.

The Giants must have thought that they had a chance in the beginning but it all faded away very quickly.

Bishnoi was the standout bowler for the Super Kings as he dismissed both Goves and star all-rounder Louis Bruce in the powerplay overs. Along with Ishaq, Bishnoi ruled in the first three.