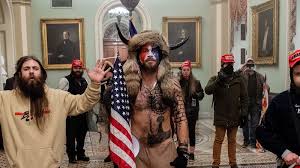 Jacob Anthony Chansley was among the Trump supporters who tried to stop Congress from certifying the 2020 presidential election on 6 January.

The 34-year-old became one of the most recognisable figures from the siege after being pictured wearing horns and a bearskin headdress, with a US flag painted on his face. He referred to himself as “the QAnon Shaman”.

Followers of the QAnon conspiracy theory believe that former President Donald Trump was waging a secret war against a cabal of Satan-worshipping paedophiles in government, business and the media.

He has been in custody nearly 11 months since being arrested just days after the riot.

Photographs and videos taken during the riot show Chansley carrying a spear in the Capitol. Prosecutors also say he led other protesters in prayer at the dais – a raised platform – and left a note a note threatening former Vice-President Mike Pence. 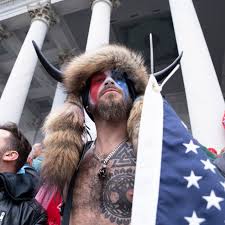 A Trump supporter who became known as the ‘QAnon shaman’ after being pictured during riots at the US Capitol is reportedly a “failed actor” and conspiracy theorist described by his mother’s neighbours as “bizarre.”

Chansley, who has been held without bail since his arrest in January, pleaded guilty in September to a single criminal count of obstructing a proceeding of Congress.

Chansley was shirtless, wielding a spear, wearing face paint and a fur hat with horns when he walked into the Capitol complex with thousands of others, disrupting the confirmation by a joint session of Congress of Joe Biden’s victory in the presidential election.

Angeli enlisted in the United States Navy on September 26, 2005. After boot camp and training as a supply clerk, he was assigned to the aircraft carrier USS Kitty Hawk in March 2006. At some point, he refused to take an anthrax vaccine and was scheduled for dismissal from the Navy.

On September 29, 2007, he was sent to a Transient Personnel Unit in Puget Sound in Washington state, and was processed out of the Navy on October 11. After two years and 15 days in uniform, his final rank was Storekeeper Seaman Apprentice.