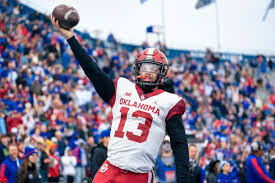 With OU down 35-20, then-OU head coach Lincoln Riley put backup quarterback Caleb Williams into the game. Caleb led the Sooners to a thrilling 55-48 win against the Longhorns.

In addition to continuing the season as OU’s starter at quarterback, leading the Sooners to an eventual 10-2 overall record and their first-ever Alamo Bowl appearance, Caleb Williams has shown multiple signs of loyalty to the OU football program, and is expected to lead the 2022 Oklahoma Sooners.

In a podcast released earlier this month, Williams talked about he and his father putting together a recruiting trip in summer 2020 and enticing other potential Sooners to attend, and the bond that was created.

Williams wasn’t just giving the “Horns Down” with his hand. He was also doing it with his nails.

If you look closely, his pointer and pinky fingers have an upside down Longhorn. On his middle two fingers on both hands it reads “FU UT,” as in “F**K U UNIVERSITY OF TEXAS.” 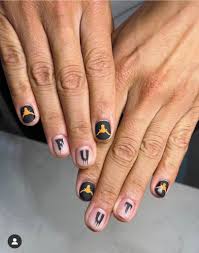 Regardless, whatever decision he makes, we should all wish him the best because this situation is way more difficult than people make it out to be. It’s not just “oh! you are loyal to a coach and the coach only!”.

It has a lot to do with scheme fit and also whether they mesh well with the new coaching staff. If he does leave, I don’t know where he’d go. Def not USC, I feel like he feels betrayed, just based off the last Instagram post he made. What do ya’ll think?