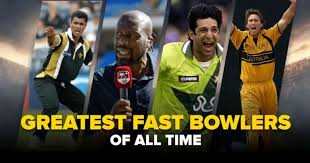 Wasim Akram was rated as the greatest bowler of all time. The impact of this man on the cricket pitch is immeasurable. He is known for his reverse swing and toe-crushing swinging yorkers.

He was part of the 1992 World Cup winning team and was also adjudged man of the match for his all-round performance of 3/49 out of 18 and 33.

The English legend is ranked number 2 in the list of best fast bowlers of all time. His contribution to the game is immeasurable and will never be repeated again in the game.

The most unique statistics of his career are phenomenal averages which cannot be replicated again in cricket. He played a total of 27 Test matches in which he took 189 wickets at an astonishing average of 16.43.

The dominance of West Indies cricket during the 70s and 80s is mainly due to their top-class bowling and fearsome batting.

Malcolm Marshall was leading the pace attack during his time which was enhanced by some of the greatest bowlers such as Joel Garner, Curtly Ambrose and Courtney Walsh.

His ability to swing the bowling and his quick bouncers are always difficult for any batsman.

Hadlee was the record-breaker bowler of his time. He broke the record of Lillee which was stood for so many years. In his career, he became the first bowler to pass the 400 Test wickets mark. The New Zealand international took the wickets with an impressive average of 22.29 which was very impressive during his time.

He was one of the greatest bowlers New Zealand has ever produced. Hadlee was well known for his swing and accuracy throughout his career. He took a total of 431 wickets in 86 matches that he had played.

Dennis Lillee was known for his aggressive style and is one of the most brutal fast bowlers the world has ever produced.

He took 355 Test wickets in a total of 70 matches which was a record in his time. It has always been difficult for any batsman across the world to face Lillee at his peak. 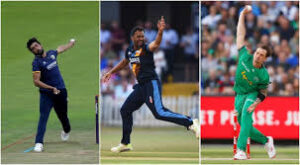 He is the most accurate bowler in the game. The line and length of this bowler is no match in the cricket world. He mostly relies on his length and swinging delivery instead of focusing on pace.

Glenn McGrath is undoubtedly one of the greatest bowlers Australia has ever produced. He also took a total of 381 wickets in 250 matches, at an average of 22.02.

Curtly Ambrose has been known for his fearsome and economical bowling throughout his career. He took 405 wickets in 98 matches he played with West Indies. His economy of 2.31 is one of the best in the history of Test cricket.

Ambrose has just carried on the legacy that was left behind by the former West Indies bowlers. His scintillating partnership with Walsh is one of the most devastating landmarks for any opposing batsman.

Courtney Walsh does not need any introduction in this list. He took 500 test match wickets which is not a joke and he is the first bowler to achieve this feat in the history of test cricket.

His partnership with Curtly Ambrose is well known and both are phenomenal for West Indian cricket.

Waqar Younis was one of the greatest fast bowlers Pakistan has ever produced. He is one of the best swingers on the ball. He is known for his ability to reverse swing.

His toe-crushing yorker is a nightmare for any batting lineup across the globe. His pairing with the great Wasim Akram is said to be the scariest pair in the history of the game.

After the Allan Donald era, Steyn was the one who led the South African team’s fast attack all over the world. It is remarkable to see the achievements of Dale Steyn over the years.