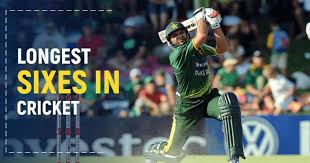 Top 10 Biggest Six: International cricket was more about hitting the ball cleanly rather than out of the park. However, as the game became more popular, it became competitive as well.

The need for more runs in limited-overs rose and sixes became commonplace.

Surprisingly, number 1 on this list is one of the world’s fastest ‘bowlers’ – Brett Lee. Binga’s mammoth six came in a test match against West Indies’ pace bowler Darren Powell. He comes to bat at number 9 and played a crucial knock of 47 in the latter part of the innings.

Pakistani all-rounder smacked Andrew Symond’s juicy full-length delivery for a mighty blow-over long-on. This proved to be the second-longest six in cricket history. His quickfire 30 in just 13 balls sealed a 3-wicket victory for Pakistan in the 8th ODI of CB Tri-series 2004-05. 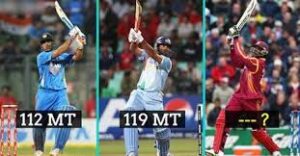 On number 3 is Martin Guptill’s 127m shockers off South Africa. South Africa was playing their 1st T20I of their 2011-12’s tour of New Zealand. Although being thrashed for a massive 103m six.

Fifth on this list is ‘The Universe Boss’, Chris Gayle for his very famous gigantic six against Australia at the Oval, London in the ICC T20 World Cup 2009. Gayle’s six was so huge that it went out of the stadium onto the streets of London.

The distance of this six hasn’t been registered. But the 6 is believed to be almost 120-125 meters long.

First Indian name appears in the list and the name is 6-sixes in an over ‘Yuvraj Singh’. He smashed the biggest six in cricket of 119 meters off Australia’s fastest bowler-Brett Lee. The aggressive left-handed Indian batsman hit this six in an extremely crucial semi-final of the 2007 T20 world cup in South Africa.

Next again comes Martin Guptill’s huge 113m six against Australia in the 1st ODI of Australia’s tour of New Zealand 2016/17. The ball hit the roof of Eden Park as Guptill smashed a full-length delivery outside off by Kane Richardson over long-on.

“GOD OF CRICKET” The Master Blaster has always been a batsman known for hitting exquisite cover drives and straight drives. However, in the 2003 World Cup pool match played against England, Sachin Tendulkar shook the world with his very popular six off Andy Caddick at Kingsmead Durban.

Number 10 on this list is captian Dhoni’s monstrous six of 112 meters hit against the arch-rivals Australia in a 2011-12 Commonwealth Bank Tri-Series’ nail-biting finish. This is considered one of the biggest six in the history of international cricket as it was hit in a very crunch situation. India needed 12 runs off 4 balls when ‘Captain Cool’ smashed Clint McKay’s half volley over long-on.