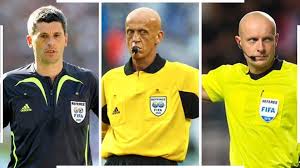 Today Sportsbugz have compiled a list of top 10 football referees in the world. Most of these referees conduct their business in the top European leagues and have officiated in several notable matches. Let’s find them out. The 2018 FIFA World Cup was pictured with the Video Assistant Referee (VAR).

Felix Breich, 45, is a German football referee. He has been a FIFA licensed referee since 2007, and is ranked as the UEFA Elite Group referee. Brych has officiated in notable matches such as the 2014 UEFA Europa League final between Sevilla and Benfica.

And also the 2017 UEFA Champions League Final. He was selected among the passing referees of the 2018 FIFA World Cup in Russia. Brich is considered one of the highest ranked European referees of his generation.

The 45-year-old Italian referee has been a full-fledged international referee for FIFA since 2010 and has officiated in over 300 matches.

Orsato in charge of the 2020 UEFA Champions League final match between Paris Saint-Germain and Bayern Munich. He was awarded as the best referee of 2020 by the International Federation of Football History and Statistics (IFFTHS).

Björn Kuipers is a 47-year-old Dutch referee, a FIFA listed referee and UEFA Elite Group referee since 2006. Kuipers is a very athletic referee, with a good substitute record and some controversy.

Bjorn Kuipers has officiated in prestigious football matches such as the 2011 UEFA Super Cup, 2013 UEFA Europa League Final and 2013 FIFA Confederations Cup Final. He has also officiated in the 2014 UEFA Champions League final and most recently the 2017 FIFA U-20 World Cup final. He also owns a supermarket in the Netherlands.

Damir Skomina, is a 44-year-old Slovenian referee, and a full international FIFA referee since 2003. Scomina served as the fourth referee in several matches.

He was the fourth official in the 2013 UEFA Champions League Final. Other notable matches he played in include the 2012 UEFA Super Cup and the 2017 UEFA Europa League final between Ajax and Manchester United.

Mateu Lahoz is a popular Spanish football referee. He is currently rated as one of the best football referees in 2019. He is also a notable international referee who refereed during the 2014 FIFA World Cup qualifiers. 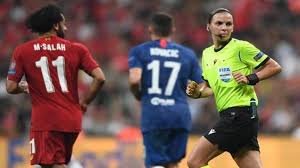 The 42-year-old English referee has been an international referee for FIFA since 2013. Early in his career he served as the fourth official in several matches.

Notable matches he has officiated include refereeing for the Football League Cup final between Chelsea and Tottenham Hotspur in 2015. In September 2020, Taylor was selected as the chief referee for the 2020 UEFA Super Cup.

Known as perhaps the best Colombian referee in the country’s history, the former referee joined the ranks of FIFA in 1995.

Over the course of 16 years, Ruiz would play games in three different World Cups. Not one to be embroiled in controversy, Oscar Ruiz had a relatively stable career for many years.

After officiating in home games for five years, Proenca was promoted to FIFA’s referee ranks in 2003. He had the honor of conducting UEFA Cup matches, the Under-19 Championship and eventually the Euro.

He also became the first Portuguese referee to participate in a European Championship final (Spain v Italy in 2012), and he also refereeed the UEFA Champions League final in the same year.

Notably, the England-born star referee was the first referee to officiate in the finals of both the UEFA Champions League and the FIFA World Cup in the same year.

Known for his strict and fair approach along with his authoritativeness on the pitch, Webb is arguably one of the best referees in football history.

Pierluigi Colina was also indicted in the most shocking match-fixing scandals in European history: Calciopoli. In particular, the instigators of the scandal planned to punish Colina for her blatant impartiality during the game.

The disclosure of these plans justified the referee and also improved his international standing.