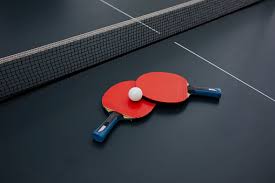 Table tennis, also known as ping-pong and whiff-whaff, is a sport in which two or four players hit a lightweight ball, also known as the ping-pong ball, back and forth across a table using small rackets. The game takes place on a hard table divided by a net.

The table tennis was originated in Victorian England, where it was played among the upper-class as an after-dinner parlour game. It has been suggested that makeshift versions of the game were developed by British military officers in India around the 1860s or 1870s, who brought it back with them.

A row of books stood up along the center of the table as a net, two more books served as rackets and were used to continuously hit a golf-ball.

The next major innovation was by James W. Gibb, a British enthusiast of table tennis, who discovered novelty celluloid balls on a trip to the US in 1901 and found them to be ideal for the game. This was followed by E.C. Goode who, in 1901, invented the modern version of the racket by fixing a sheet of pimpled, or stippled, rubber to the wooden blade.

After the 2000 Olympics in Sydney, the ITTF instituted several rule changes that were aimed at making table tennis more viable as a televised spectator sport. First, the older 38 mm (1.50 in) balls were officially replaced by 40 mm (1.57 in) balls in October 2000.

This increased the ball’s air resistance and effectively slowed down the game. By that time, players had begun increasing the thickness of the fast sponge layer on their paddles, which made the game excessively fast and difficult to watch on television.

A few months later, the ITTF changed from a 21-point to an 11-point scoring system (and the serve rotation was reduced from five points to two), effective in September 2001. 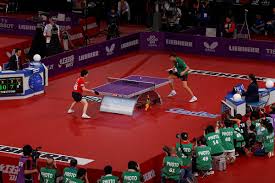 Balls are now made of a polymer instead of celluloid as of 2015, colored white or orange, with a matte finish. The choice of ball color is made according to the table color and its surroundings.

Players are equipped with a laminated wooden racket covered with rubber on one or two sides depending on the grip of the player. The ITTF uses the term “racket”, though “bat” is common in Britain, and “paddle” in the U.S. and Canada.

‘A good ready position will enable you to move quickly into position and to stay balanced whilst playing powerful strokes.’

The stance in table tennis is also known as the ‘ready position’. It is the position every player initially adopts when receiving and returns to after playing a shot in order to be prepared to make the next shot.

It involves the feet being spaced wider than shoulder width and a partial crouch being adopted; the crouch is an efficient posture for moving quickly from and also preloads the muscles enabling a more dynamic movement.