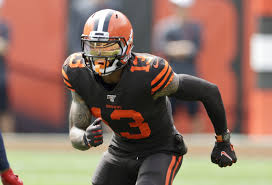 Of all the various factors that Odell Beckham Jr. had to consider this week in picking his next team, an apparently important one became a sticking point between OBJ and the L.A. Rams.

Although Beckham currenty has no number issued to him on the roster listed at the official website, the Rams say Beckham will wear No. 3. In other words, too bad Cam Akers.

The Rams and Odell Beckham Jr. had few issues negotiating a deal for Beckham to come to Los Angeles. The former Browns receiver inked a one-year deal worth $4.25 million.

It took Beckham a few days to officially agree to the deal with the Rams. That was partially due to him considering offers from other teams, like the Packers and Chiefs. However, it appears that there may have been another issue at play. Beckham’s jersey number. 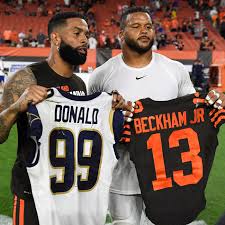 The balance on his 2021 contract was $7.25 million and the final two years of the contract were voided. Beckham, the 12th overall selection in the 2014 NFL Draft, signed a four-year, $10.4 million rookie contract. He made $8.46 million in 2018 on his fourth-year option before his five-year extension kicked in.

Beckham, who joined Los Angeles on an incentive-laden deal this past Thursday, is expected to make his Rams debut Monday night against the division-rival 49ers, sources told ESPN.

Beckham was used as a punt returner early in his career with the Giants, but he has returned only one punt since 2019 in his two-plus seasons with the Browns.