Kyler Cole Murray is an American football quarterback for the Arizona Cardinals of the National Football League. He played college football for the Texas A&M Aggies and Oklahoma Sooners. He also played as an outfielder for the Oklahoma Sooners baseball team.

Murray didn’t practice Wednesday and Thursday, and wasn’t on the field for the open portion of Friday’s practice. Arizona’s final injury report of the week had not yet been released. Kingsbury’s stance on Murray’s status for Sunday hasn’t changed all week.

On Friday, Kingsbury again said Murray will be a game-time decision and that his ankle has been progressing. When discussing Murray’s ability to “function,” Kingsbury pointed out Murray’s success this season in the pocket, specifically referring to Murray’s accuracy and ability to go through his progressions. 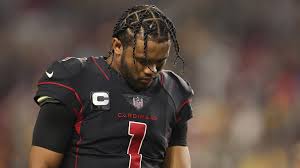 Murray (ankle) remains listed as questionable as the 4:25 p.m. ET kickoff for Sunday’s game against the 49ers approaches, but Jay Glazer of Fox Sports relays that it will take “something miraculous” in pregame warmups for the quarterback to play.

The Oakland Athletics chose Murray with the ninth-overall selection in the 2018 MLB Draft. He’d eventually become the first player chosen in the first round of both the MLB and NFL Drafts.

He was named AP College Football Player of the Year and was awarded the Heisman Trophy for his performance. Following Mayfield, Murray was drafted first overall himself by the Cardinals in the 2019 NFL Draft.