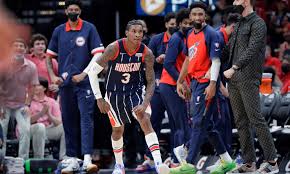 Bryan Kevin Porter Jr., also known by his initials KPJ, is an American professional basketball player for the Houston Rockets of the National Basketball Association. He played high school basketball for Rainier Beach High School and led the Vikings to the state playoffs in each of his four years.

Porter made a 3-pointer with 0.4 seconds left to beat the Wizards 114-111. Consor said: “You’ve got to give credit. Kevin Porter Jr., like his dad, pulled that trigger right at the right time.”

Porter’s father reportedly pleaded guilty to manslaughter in the shooting death of a teenager in 1993. Consor said he mistakenly thought Porter was the son of former Washington player Kevin Porter.

“Please allow me to take this opportunity to sincerely apologize to Kevin Porter Jr., his family and the Rockets organization for the comments I made during last night’s game,” Consor said on social media. 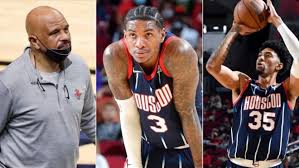 Porter was born in Seattle, Washington, to Ayanna and Bryan Kevin Porter Sr. His father played football, basketball, and baseball at Rainier Beach High School in Seattle in the 1990s.

“You’ve got to give credit. Kevin Jr., like his dad, pulled that trigger right at the right time,” Consor said in the final seconds of Houston’s 114-111 win.

Porter Sr. ended up being sentenced to four years and six months in prison for the crime. In 2004, Porter Sr. was shot and killed in a Seattle bar while attempting to help someone being attacked.