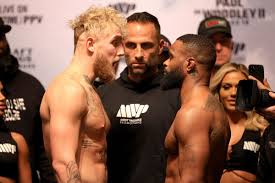 Both faced off each other in August when The Problem Child won over The Chosen One with a score decision after 8 rounds of epic clash.

The rematch four months in the making is finally here. After scoring a split decision win in August, Jake Paul will look to do the same against former UFC welterweight champion Tyron Woodley on Saturday night in the main event of a Showtime PPV.

Paul has rolled through his competition to date inside the boxing ring, with three knockout victories to start his career — albeit against opponents who had never stepped into the squared circle. Now, he gets the chance to finish Woodley, who arguably landed the biggest punch of their first meeting when the combat sports veteran sent Paul stumbling into the ropes.

Also on the card is unified women’s featherweight champion Amanda Serrano as she moves to lightweight against Miriam Gutierrez with the hopes of securing a bout with Katie Taylor in 2022. 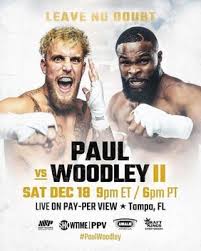 The Paul vs. Woodley rematch, which is scheduled for eight, three-minute rounds at 192 pounds, will go down TONIGHT (Sat., Dec. 18, 2021) from inside Amalie Arena in Tampa, Fla., streaming on Showtime Boxing pay-per-view (PPV) at 9 p.m. ET.

MMAmania.com will deliver LIVE coverage of tonight’s PPV main card. The $59.99 Showtime PPV (also available on FITE.tv outside North America) kicks off at 9 p.m. ET (watch it here), with Paul and Woodley likely to make the walk closer to midnight.

The PPV broadcast will also feature former NFL running back Frank Gore tangling with former NBA point guard Deron Williams. And getting back to serious boxing, we’ve got a surprisingly good fight between two young, undefeated Junior Welterweight talents in Yomar Alamo and Liam Paro to kickoff the show.