Henry has over 36 years of experience as a founder, manager and investor in sports, finance, media and business enterprises, including over 31 years of experience in baseball ownership, winning four World Series championships with the Boston Red Sox.

Fenway Sports Group was founded two decades ago by a team led by trader John Henry, whose net worth Forbes estimates at $3.6 billion. 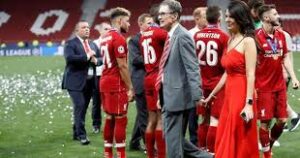 Fenway Group hopes to finalize the financial details of its purchase of the NHL’s Pittsburgh Penguins by Monday.

And that’s only the start to the latest expansion phase of the Boston-based sports conglomerate that already has MLB (Red Sox), Premier League (Liverpool), and NASCAR (RFK Racing) franchises in its portfolio.

While more teams from the NFL, NBA, WNBA, MLS, NWSL, and European soccer are on FSG’s shopping list, other sports-associated industries — from sports betting, news and entertainment, and data analytics to esports and a new Nike line of Liverpool apparel featuring FSG’s most recognizable partner, LeBron James — are on it, too.