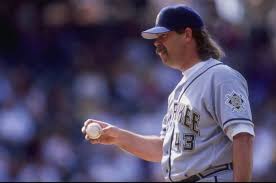 The death of Jones originally was announced on Twitter by former Cleveland teammate Greg Swindell, a close friend.

Jones saved 303 games during a 16-year career in the majors, making all-star teams five times despite being one of the softest tossers in the game.

“We are saddened by the loss of one of our orgs all-time greats, Doug Jones,” the Twitter account of Jones’ former team posted on Monday, highlighting some of the relief pitcher’s impressive franchise stats

Doug Jones, a former All-Star closer for the Astros, has died. He was 64.

Greg Swindell, a teammate of Jones’ in Houston and Cleveland, tweeted Monday afternoon that Jones had died of complications from COVID-19.

Jones spent seven seasons with the Indians and ranks third on the club’s career saves list with 129. The club, which officially transitioned to Cleveland Guardians last week, said Monday that it was “saddened by the loss of one of our organization’s all-time greats.”

Jones was a National League All-Star in 1992, when he had a 1.85 ERA and led the NL in games finished with 70. He finished 14th in NL MVP voting that season.