There are rumors that Henry might squeeze in a few snaps before the NFL playoffs, which is when he’s currently expected to return.

While reports state he might play in Week 18 to shake any rust before an all-important postseason game, the expectation is that Week 17 against Miami will be too soon for Henry to suit up.

According to reports, his rehab is going well, and the Titans have hinted at Henry making a return in the near future. Currently, he’s not quite close enough to a return, and Tennessee will once again have to call on a committee of backs to fill the void.

The 6’3, 240-pound Tennessee Titans running back is one of the most devastating forces in the league with the ball in his hands. Henry has led the NFL in carries, rushing yards and rushing touchdowns the past two seasons, winning last season’s Offensive Player of the Year award.

Before suffering an October foot injury, he was on pace to lead in those categories this season. Now, he’s looking to return in time to lead the Titans into the playoffs. 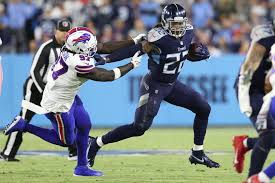 The Titans placed Henry on injured reserve back on Nov. 1. Henry was technically eligible to return from IR at the end of November but it is unlikely that he returns in Week 17 against the Dolphins.

So when will Derrick Henry be back and return to the Titans lineup?

NFL Network’s Tom Pelissero said Monday on “Good Morning Football” that Henry may play in the Titans Week 18 game against the Texans.