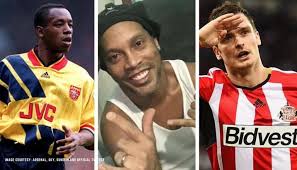 Association football, more commonly known as simply football or soccer, is a team sport played with a spherical ball between two teams of 11 players.

Adams was sentenced to four months in prison in December, though he was released early in the sentence in February. During the mid 90’s Adams publicly admitted that he had a problem with alcoholism and began treatment to begin his recovery.

The Liverpool defender missed three months of the 1988-89 campaign due to being imprisoned for drunk driving. Earlier that year, Molby had crashed his car outside of a Liverpool nightclub while drunk. His sentencing did not come until October, but Liverpool decided to stand by their player. When he got out of jail he was placed right back into the first team until an injury in March kept him out.

Higuita was imprisoned for being involved in a kidnapping. The kidnapping involved famous Colombian drug baron Pablo Escobar. While Higuita’s job was simply to deliver the ransom money, he was paid for his services, and it is against Colombian law to profit from a kidnapping.

Duncan Ferguson may be fondly remembered for leading Everton to their 1995 FA Cup victory over Manchester United, and for helping them navigate through the qualifying stages of the 2006 UEFA Champions League. However off the field Ferguson had a whole bevy of problems, including four assault charges.

One of the greatest players to ever play for Manchester United, Best’s career and life, was marred by a crazy lifestyle off the pitch. Best was a well known alcoholic, which often interfered with his footballing career. In 1984 Best’s life began hitting rock bottom.