Vonie B’Vicien Miller is an American football outside linebacker for the Buffalo Bills of the National Football League.

Miller played college football at Texas A&M, where he earned All-American honors and the Butkas Award. He was selected second overall in the 2011 NFL Draft by the Denver Broncos.

Von Miller of the Buffalo Bills certainly made an impression Thursday night in his return to SoFi Stadium, the location of his Super Bowl victory with the Los Angeles Rams the previous season. It was easy to assume that Miller wanted to make a good impression.

In addition to recording a sack of Rams quarterback Matthew Stafford in the first quarter, Miller also attracted attention for sporting an unusual hairdo even by Miller’s standards.

The hairstyle is similar to a look that Miller actually wore with the Rams last season as well as a similar style with the Broncos in 2015. The main difference was that Miller previously sported a circular patch of hair on the back of his head compared to a triangle. Shown on Thursday.

The 33-year-old Miller, who played for the Denver Broncos, Rams, and now Bills for stretches of 11 seasons, has always drawn attention for his outlandish dressing. 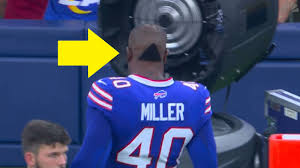 His post-game attire frequently makes the news. And Thursday wasn’t the first time a lot of people noticed Miller’s hair.