This past weekend, Tai Emery knocked out her opponent with an uppercut that would make for a great highlight reel, but it was her post-fight celebration that made the combat sports world take notice.

On Friday in Bangkok, a Bare Knuckle Fighting Championship match took an explicit turn when a female combatant showed off her breasts to the crowd following a knockout victory. 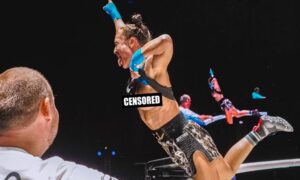 Over the weekend, Tai Emery, who was competing against Rung-Arun Khunchai, delivered a hard punch before leaping onto the ropes and lifting her sports bra toward the spectators.

Emery defeated Khunchai with a right uppercut and left hook that knocked her to the ground and kept her there until the winner’s celebration.

Prior to her first-round knockout victory, the former model and electrician had never participated in the sport of bare knuckle fighting. But Emery has participated in amateur MMA matches.