Serena Jameka Williams is an American professional tennis player. She has been ranked singles world No. 1 by the Women’s Tennis Association for 319 weeks, including a combined record of 186 consecutive weeks, and finished the year as No. 1 five times.

Williams is only 40 at her retirement.

I have to prioritise being a mother, achieving my spiritual objectives, and finding a new, interesting Serena. I’m going to enjoy these upcoming weeks. Although Williams, 40, did not state explicitly in the article that the U.S. Open would be her final competition, all indications are that it would at the very least be her final major.

In a Vogue article, Williams, who will be 41 in a few weeks, announced that she will stop playing tennis after the U.S. Open, which starts in late August. With a victory in the competition, she would match Margaret Court’s record of 24 grand slam victories.

At the age of three, Serena started working out on a court close to her Compton, California, home. Williams started playing tennis professionally in 1995 and won the French Open, U.S. Open, and Wimbledon in 2002, all while defeating Venus in the championship matches. 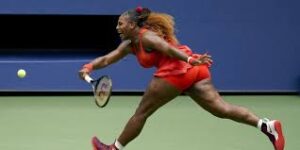 She said, “If I had to pick between establishing my family and building my tennis resume, I prefer the latter.”

Olympia, Williams’s daughter, is five years old and she and her husband, Alexis Ohanian, hope to expand their family in the near future.

Williams wrote, “I have never liked the word retirement. “Perhaps “evolution” is the best word to express what I’m doing. I’m here to let you know that I’m moving away from tennis and toward other priorities.”