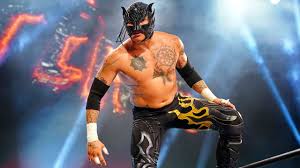 Rey Fenix is a Mexican luchador enmascarado signed to All Elite Wrestling and Lucha Libre AAA Worldwide; he and his brother Pentagon Jr. / Penta El Zero Miedo, with whom he forms the tag team Lucha Brothers, are one-time AEW World Tag Team Champions.

AEW Dynamite’s TBS premiere closed out this week with Jurassic Express beating The Lucha Brothers for the AEW World Tag Team Championships. But as the show ended, more fans were concerned with what happened outside the ring, as Rey Fenix seemed to suffer a gruesome-looking arm injury after being chokeslammed off the apron by Luchasaurus through a table propped up on the floor below.

He immediately signed to the referees that something was wrong with his left arm as it contorted when he landed and the match ended shortly afterwards. 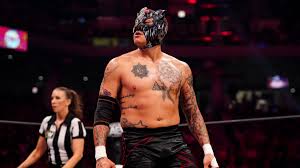 Medical staff immediately rushed to Fenix’s side, and he did not factor in the finish of the match (nor did it seem like he was supposed to). PWInsider reported he was rushed to the back for evaluation, and shortly after that Wrestling Observer’s Bryan Alvarez and Bodyslam.net’s Cassidy Haynes tweeted the Lucha Bro suffered a broken arm and was heading to the hospital.

A follow-up report from the site says Atlas “blew out his knee”, but notes the severity is unknown. Alvarez later tweeted Jake is scheduled for an MRI.

We’ll keep you posted on both men, hoping for a good diagnosis for Atlas and that Fenix’s arm isn’t as bad as it looked in that video.

Rey Fenix took a brutal bump – that’s his elbow going the wrong way. Prayers it looks worse than it is. #AEWDynamite

The Luchador looked in pain following the brutal landing, even signaling at officials to check on his arm. However, this didn’t lead to the match being stopped or ending prematurely, as Penta and Jungle Boy finished the contest, with the latter pinning the former for the win.