The Queen’s Club Championships 2022 is an annual tournament for male tennis players, held on grass courts at the Queen’s Club in West Kensington, London. The event is part of the ATP Tour 500 series on the Association of Tennis Professionals Tour.

The compact tournament means that players who reach the final eight play on consecutive days at Queen’s.

The finalists will have a maximum of eight days between Queen’s and the start of their Wimbledon 2022 campaigns.

The Lawn Tennis Association sold the club to members for £35 million in 2006, avoiding a legal battle after patrons claimed it did not have the right to put Queen’s up for sale. 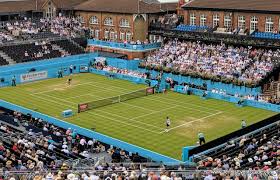 UK: Amazon Prime Video will be providing live coverage from Queen’s, and fans can sign up for a free 30-day trial of the platform. Subscriptions cost £7.99 a month.

BBC One and BBC Two, BBC iPlayer and the BBC Sport website will also be keeping up with the action live.

USA: Viewers in the United States can subscribe to Tennis Channel to stream the action.

Canada: TSN are carries of ATP tournaments in Canada, including the Queen’s Club Championships.

Australia: beIN SPORTS is the place to catch the action in Australia.