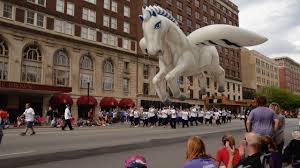 The Pegasus Parade 2022 makes its grand return, and for the first time, on a weekend! The parade is Sunday, May 1, and once again takes over Broadway downtown. It lasts about two hours.

Ethan the Dog and Virginia Moore, the governor’s beloved American Sign Language interpreter got a lot of shine in the last few years, and they’re some of the local celebrities in this year’s parade.

The Pegasus Parade, as most people know, has been on hiatus since 2019 due to the pandemic. In previous years, it has been the Thursday before the Derby.

But this year’s event will be held at 3 pm on Sunday. Boyd said he moved the parade to Sunday after receiving feedback from community members.

Officials have closed the streets for this weekend’s Pegasus Parade, which kicks off Kentucky Derby week. This year’s theme is “Loving Louisville”.

Kentucky Derby Festival officials said parade units are being asked to use decorations with “landmarks, icons, sports teams, music and lots of hearts” to show their love for the city.

After closing events to spectators last year due to COVID-19, KDF is also welcoming people back in-person this year. Festival organizers said they believe they have the tools needed for the public to safely gather, and KDF is looking at venues with plenty of space for events that are indoors. 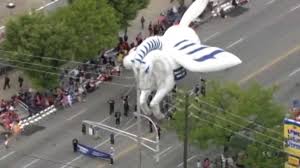 The 2022 Pegasus Parade will feature marching bands and horses, along with inflatable characters and floats–all highlighting what people love most about the city.