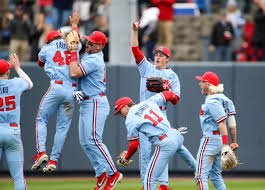 The Ole Miss Rebels baseball team represents the University of Mississippi in NCAA Division I college baseball. The team participates in the West Division of the Southeastern Conference. They are currently coached by Mike Bianco.

Due to the spread of the novel coronavirus COVID-19, the 2020 baseball season was cut short and all participating student-athletes are able to retain their year of eligibility from the NCAA.

In accordance with SEC guidelines, the experience level of participating players has been upgraded to reflect academic progress.

Senior citizens enlisted with an asterisk still have one year of eligibility left, if they choose to exercise that option.

Due to expected inclement weather in Mississippi on Tuesday, the Rebels’ game originally scheduled for 4 p.m. CT against Arkansas State has been moved to Wednesday at 1 p.m. CT on SEC Network+.

The Rebels are coming off a sweep of Charleston Southern on opening weekend in Oxford, and they moved up in D1 Baseball’s Top 25 as a result.

Ole Miss outscored the Buccaneers 32-6 in the series over the weekend, including run-rule results on Saturday and Sunday. 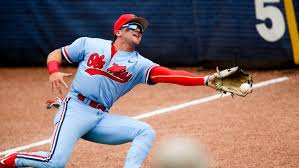 Seven of those players return as regular starters from a year ago, albeit some in different positions. Elko is moving to third base to replace Seattle Mariners draft pick and 2020 All-America performer Tyler Keenan.

Justin Bench is moving to centerfield full-time as opposed to his utility role as a second baseman, centerfielder and corner outfielder a year ago.

Football season tickets are available at www.olemisstix.com. All tickets for the 2022 season will be digital. Season tickets will be sent in mid-August to the account holder of record.

Applicable per seat donations must be paid to the Ole Miss Athletics Foundation before tickets are sent.

Fans will be allowed to bring their own chairs and the barbecue areas will be reopened. Face coverings will still be required when entering, leaving and moving about the stadium. Fans will not be required to wear face coverings while at their seats.

His addition feels somewhat similar to Arkansas’ addition of Houston transfer Lael Lockhart before last season, as both were moving up to the SEC after very successful four-year careers pitching with less than elite stuff.

Lockhart sometimes found himself a bit outmanned against good SEC lineups, but he emerged as one of the most dependable arms the Razorbacks had in the end, and Ole Miss would likely be very satisfied if the Gaddis followed his path everytime.