Novak Djokovic is a Serbian professional tennis player. He is currently ranked world No. 8 in singles by the Association of Tennis Professionals (ATP).

Additionally, he discussed how the Serb might easily win up to 10 Grand Slams before retiring.

Due to his lack of vaccinations, Djokovic missed the previous tournament and was given a three-year visa suspension. After the Australian government announced that it will lift the prohibition on his visa, he has finally been given the all-clear. 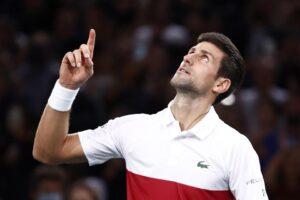 Prior to the year-end championships, Novak Djokovic issued a warning to the rest of the field by declaring that he always strives to win. He added that he will maintain this mentality during the ATP Finals as well.

The Serb’s 13-match winning streak came to an end on Sunday when he lost to Holger Rune in the Paris Masters championship match by scores of 3-6, 6-3, and 7-5.

When asked how important it would be for him to win the ATP Finals, Djokovic said in his post-match press conference that he was satisfied with his level right now and wanted to compete to the very end at the O2 Arena.