The Garmin Noosa Tri is regarded as one of the top 10 triathlons in the world for good reason and is the premier event on the Australian athletic calendar.

There is no other place you would want to be when the top athletes, largest field of competitors, stunning beachside ambience, and week-long celebrations of Noosa all come together. 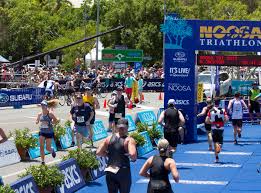 The two-time Olympian, who had a dismal Tokyo campaign, gave up the shorter course circuit and had quick success on the lucrative Professional Triathletes Organisation middle distance tour, capping off a fantastic year.