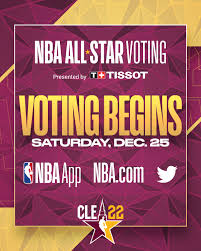 NBA All Star Voting 2022: The National Basketball Association is a professional basketball league in North America. The league is composed of 30 teams and is one of the four major professional sports leagues in the United States and Canada.

It is the premier men’s professional basketball league in the world.

Allen is having a remarkable season, playing a huge role in the Cavaliers’ surprising success.

Average career-highs in points per game, rebounds per game and field goal percentage, Allen has proved his worth as a cornerstone of Cleveland’s franchise.

Harden’s talent was too much for most to ignore, evidenced by his landing in the top 10.

He closing the month of December with back-to-back showstopping performances in his hometown against the Lakers and Clippers could be a sign of things to come in 2022.

The Hawks have struggled with consistency following their trip to the Eastern Conference Finals, but the numbers point to them being a completely different team without Young, who is putting together another strong season.