American professional mixed martial artist and student of Brazilian Jiu-Jitsu Mackenzie Lynne Dern Santos. She was formerly ranked No. 1 in the world by the IBJJF and is currently No. 6 in the female divisions. She is a no-gi BJJ World Champion and an ADCC.

She earned $164,000 for her most recent victory over Nina Nunes at UFC Fight Night: Vettori vs. Holland. Her greatest earnings to date.

Mackenzie Dern has a net worth of approximately $1 million. 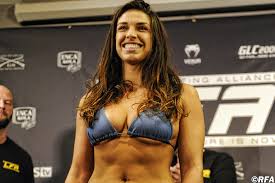 On October 1, 2022, the Ultimate Fighting Championship (UFC) will have an event with a “Fight Night” theme. In a crucial women’s strawweight fight, Mackenzie Dern will square off against Yan Xiaonan, according to ESPN.