Kyrie Irving is an American professional basketball player for the Brooklyn Nets of the National Basketball Association.

He was named Rookie of the Year after being selected by the Cleveland Cavaliers with the first overall pick in the 2011 NBA Draft.

Following a week of turmoil that gripped the league, Kyrie Irving was suspended by the Brooklyn Nets on Thursday night for a minimum of five games without pay due to the NBA star’s failure to categorically denounce anti-Semitism.

When NBA commissioner Adam Silver chastised Irving for not apologising after he supported a film with anti-Semitic overtones, Irving responded with another set of combative comments in a news conference, which escalated the conflict that had been simmering for almost a week.

A day ago, Irving revealed he will donate $500,000 to organisations fighting hatred and acknowledged the film in question had a “bad impact.” “on the Jewish neighbourhood.

Last week, Irving sparked a tempest of controversy by sharing a link to “Hebrews to Negroes: Wake Up Black America” on social media “— a 2018 movie that received harsh criticism for using a number of anti-Semitic cliches and was slammed by people including Nets owner Joe Tsai. 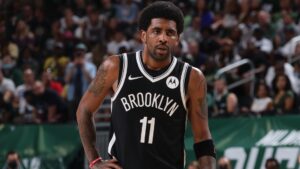 “We have determined that Kyrie will serve a suspension without pay until he completes a number of objective corrective actions that address the negative effects of his conduct, and the suspension period served is no less than five games,” the statement reads.