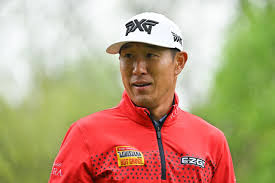 James Hahn is an American professional golfer who plays on the PGA Tour. Born in Seoul, South Korea, Hahn was raised in Alameda, California. He played college golf at the University of California in nearby Berkeley and turned professional after graduating in 2003.

When a golfer addresses the ball, it is expected that you will speak, shout, swear, move quickly, sneeze, cough, not take photos or otherwise disturb the peace.

If you do these things, you will be publicly embarrassed. If you do them frequently, you may even be asked to leave.

At the Wells Fargo Championships on Saturday, the backswing was one offense added to the list of no-go’s… and the loud eaters among us might want to listen.

Thankfully, the TV cameras hung up long enough and Han was caught pointing at his putter and saying to a gallery member, “I can hear you eating those chips, man.” Then he says something about “two minutes”.

Anyone with a DVR can hit Rewind at that time. Did he really say that he heard someone chew on greens? And did Hahn just argue that it affected his putt? Can he even hear the drop of a pin in the grass?

Anyway, Hahn couldn’t make any birdies coming in, but on this tough scoring day he didn’t need to. He shot two-over 72 and is tied for third, four shots back of Keegan Bradley.

He’s trying to win for the first time since taking the Wells Fargo in 2016. In that fight, he’ll have to be more focused and play with a smaller chip on his shoulder.

James Hahn isn’t the best golfer in the world (sorry, James), but he may have the best swing idea.

Obviously, Hahn likes to pump himself up before each shot by telling him he’s the best golfer in the world. Only he does it in an NSFW manner.

The creative people at the PGA Tour’s Skratch TV took Hahn’s response in an interview and turned it into a hysterical short video in which amateur golfers give the expletive-punctuated mantra a try. The best part is when a few kids even say it. OK, we won’t spoil it anymore.