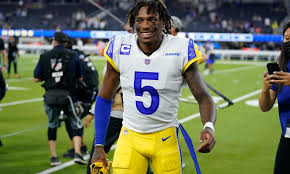 Jalen Lattrel Ramsey is an American football cornerback for the Los Angeles Rams of the National Football League. He played college football at Florida State and was drafted by the Jacksonville Jaguars fifth overall in the 2016 NFL Draft.

On September 9, 2020 Jalen signed a five-year extension with the LA Rams that is worth $105 million over five years. More on this contract later in this article.

Jalen Ramsey was born in Smyrna, Tennessee in October 1994. He is a cornerback who played for Brentwood Academy. 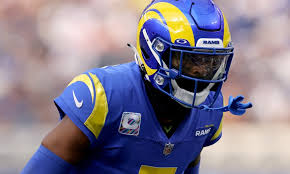 Ramsey played his college football at Florida State where he won the BCS national championship in 2013 and was a two time ACC champion.

The promising cornerback has had a fair share of relationships so far during his short career.

Jalen Ramsey had a long relationship with Breanna Tate. According to reports, the duo started dating in 2016 even before he started his career as an NFL player.

Deals with the likes of Activision Blizzard and BioSteel, among others, mean that his net worth already totals some 50m dollars, making him one of the most well-paid players in the NFL.