The Big Couloir has always been an ambition for 14-year-old Jacob Smith, who began skiing at the age of two. When it was ski season, Jacob’s father would take him and his brothers up the Lone Peak Tram so they could ski down simpler paths.

Nathan Smith and Mrs. Smith were the parents of Jacob Smith. When he was eight years old, they learned about his eyesight.

They hurried him to the hospital as soon as they realised something was wrong and realised he was no longer seeing. By directing him around the edge, his father has assisted him with his skiing.

Farmer Nathan, who is from North Dakota, frequently brought his kids skiing at Big Sky Resort. “The other day, I clapped in the kitchen and asked my mum whether she could feel the vibrations,” Jacob previously said of his mother.

His mother, meanwhile, admired him for having the drive to pursue his passion. He was raised in a skiing-obsessed family and began skiing at the age of three. 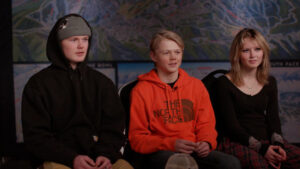 Julia, Andrew, and Preston Smith, Jacob’s three siblings, were there for him as he grew up and frequently assisted him in skiing.

He has American citizenship, but it’s unclear what race he belongs to. Only when he was eight years old can Jacob remember his life with his siblings in great detail.

Regardless, they appear to have the closest relationship the family has ever had.

I had a great time watching the entire 60 Minutes segment. Smith’s family appears to be made up of a group of talented skiers, and I adore the fact that he can compete with them despite his visual impairment.

Additionally, I came across this longer clip created by Big Sky Resort in the year 2020. I don’t know how I missed this. I’m embarrassed. My reputation as a major ski blogger has suffered a setback.