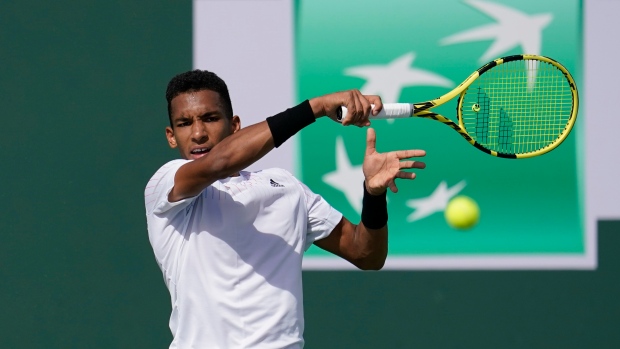 Felix Auger-Aliassime of Quebec advanced to the quarterfinals of the grass event in Halle by defeating American Mackenzie McDonald 7-6 (7), 6-1.

Auger-Aliassime won the opening set on his second chance after saving an inning ball.

The world’s ninth-ranked player then had an easier time defeating its 53rd-ranked opponent. In the third game of the second set, Auger-Aliassime earned the match’s first service break.

Two games later, he was back in command, and the remainder of the match was a routine.

With a strong winning forehand, he ended the match by breaking McDonald’s service for the third time in a row.

Auger-Aliassime told the ATP, “It’s a really encouraging performance from me.” The opening round was typical of the grass game, with two excellent servers winning on serve.

It’s the type of handle that whoever misplaces it will find aggravating. Both of us stood a decent chance of winning.

During the match, Auger-Aliassime racked up 15 aces and saved his opponent’s solitary breaking ball.

“Based on my performance in the second set, I believe I would have had a chance to win even if I hadn’t won the first,” Auger-Aliassime said.

I started playing better and better as soon as I grabbed the service break in the second set.

Auger-Aliassime will play Hubert Hurkacz of Poland, who is ranked 12th in the world, in the quarterfinals. Hurkacz beat Ugo Humbert of France 7-6 (5), 6-3.

Denis Shapovalov, a Canadian, lost the flag in the first round of the Queen’s Club event.

In a match that began on Tuesday but was cut short after two sets owing to the darkness, American Tommy Paul upset Shapovalov 6-4, 2-6, 6-4 on Wednesday.

Shapovalov ended the contest with a backhand into the net. On Wednesday, the two guys were on the field for barely 41 minutes, although their match was officially 2 hours and 2 minutes long.

In the seventh game of the third set, Paul, who is rated 35th in the world, secured the clinching service break.

Shapovalov saved a match ball when serving at 3-5 and went on to win the game. Paul, on the other hand, closed the books afterward.

Shapovalov, the sixth seed at Queen’s Club, has dropped his past five games, including both of his grass matches. On June 27, the Wimbledon competition will be shaken.

Paul will face Stanislas Wawrinka of Switzerland in the second round.

Marin Cilic advanced to the quarterfinals after defeating Alexander Bublik 7-6 (6), 7-5, while Biotic van de Zandschulp progressed to the next round by defeating Grigor Dimitrov 7-6 (5), 6-3.

In the quarterfinals, he will face qualifier Emil Ruusuvuori, who defeated Britain’s Jack Draper 6-2, 7-6. (2).