The 2022 German Open was a badminton tournament that took place at the Westenergie Sporthalle in Mulheim, Germany, from 8 to 13 March 2022 and had a total prize pool of $180,000.

He lost the match 18-21 and 15-21 due to a leg injury. Injury scare is a big issue for the youngster as he prepares for the upcoming All England Open.

He looked brilliant in the semi-final against world number one Viktor Axelsen, but injury played a big part in his final defeat.

India’s Lakshya Sen lost to Thailand’s Kunlavut Vitidsern in the final of the German Open. He lost the match 18-21 and 15-21 after suffering a leg injury.

Injury fear is a big issue for the youngster ahead of the upcoming All England Open. He looked tremendous in the semi-final against world No. 1 Viktor Axelsen, but injury played a big part in his defeat in the final. 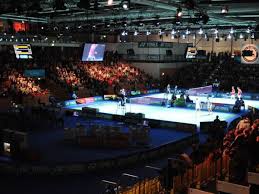 The tournament is kicked off on 8 March and will conclude on 13 March.

The 1st round of the tournament takes place on 8th and 9th March, 2nd round held on 10th March then, quarter-final on 11th March and semi-finals & finals takes place on 12 and 13 March respectively.

The German Open Badminton 2022 (officially known as Yonex Gainward German Open 2022 due to sponsorship reasons) was a badminton tournament held from March 8 to 13, 2022 at the Westenergie Sporthalle in Mülheim, Germany, with a total prize pool of $180,000.

In a true battle of equals, both the 20-year-old’s sparred off in good style, with strong attacks coming from both sides till an unruly blister played big bother for Lakshya Sen.