The formal transfer season began on August 1 with several high-profile movements in the men’s WorldTour circuit. Although riders like Richard Carapaz, Dylan van Baarle, and Tim Merlier have been signed to new teams for 2023, Mark Cavendish and Adam Yates are still up for grabs.

Second-division teams Alpecin–Deceuninck and Arkéa–Samsic are expected to move up.

The Tour de France and Giro d’Italia stage winner Merlier, 29, has signed a three-year contract with the team after leaving Alpecin. 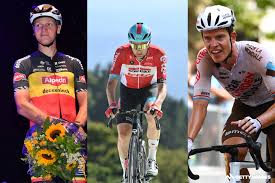 The first signings made by the Belgian Quick-Step Alpha Vinyl all corroborate recent rumours. Tim Merlier, a strong sprinter from Belgium, has signed a three-year contract to join from Alpecin. Casper Pedersen, a sprinter from Denmark, has also signed a contract, but it is only for two years.

Pedersen, who is now on Team DSM, will serve as Michael Morkov’s successor as the final outman in bunch sprints and be a valuable asset. Jan Hirt’s departure from Intermarché and 2-year contract have finally been revealed.

The two most well-known athletes on the market this year are Mark Cavendish and Richard Carapaz. The former has officially informed QuickStep-AlphaVinyl that he would be leaving, and he has hired a new agent to help him secure a new two-year contract that will allow him to attempt to break the Tour de France stage win record before calling it a day on his great career.

The transfer to EF has been highly rumoured for Carapaz, who has three Grand Tour podiums from three years at Ineos Grenadiers.