FC Porto won 4-0 at Group B leaders Club Brugge on Wednesday and will advance to the Champions League last-16 after Atletico Madrid and Bayer Leverkusen draw 2-2 on the day.

With just one game remaining, Porto moved up to nine points, four points clear of Atleti, leaving Brugge, which was already guaranteed a top-two finish, on 10 points.

After Brugge had won three of their first four group games, the game abruptly ended their remarkable run. Before Wednesday, they had not given up a goal in Group B.

After losing their first two games, Porto swept to a convincing third straight victory in the group. They appeared defensively frail and made mistakes. 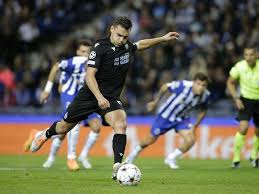 When defender David Carmo was fouled three minutes into the second half, Brugge was awarded a penalty.

Porto then carved apart the Brugge defence with Evanilson snapping up a missed clearance to make it 2-0 in the 57th minute and Eustaquio adding the third three minutes later.