One of the best stories for the Los Angeles Rams in 2021 was Cam Akers. Akers miraculously made a comeback for the Rams near the end of the regular season after tearing his Achilles in July of last year, taking back his place in the team’s Super Bowl run.

In the Rams’ backfield in 2022, Akers is anticipated to be at the top of the depth chart following his successful comeback from injuries a season ago. Entering his third season, the former second-round pick out of Florida State wants to stay healthy.

Akers made just one regular season appearance last year, but averaged 43.0 yards in 16.8 rushing attempts per game during the Los Angeles Rams’ four-game Super Bowl run. He also posted eight catches for 76 yards through the air.

Nevertheless, if Akers can stay healthy, he has all the makings of a workhorse back for the defending Super Bowl winners. He has hardly any career miles under his belt and is looking at his first full season. Between the third and fourth rounds of draughts, this running back for fantasy football is well worth the risk. 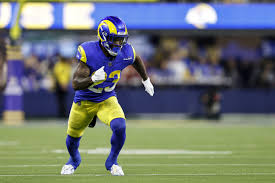 Akers, who emerged late in 2020, suffered an ACL injury just before training camp last year, which prevented him from playing for the majority of the season. In Week 18, he made a spectacular comeback to the field and assisted the Rams in winning Super Bowl LVI.

Akers returned to the field late in the previous season, but he wasn’t very productive, and he ended up sharing time in the backfield with Sony Michel and Darrell Henderson Jr. However, Michel will not be participating in 2022, therefore Henderson will now be supporting Akers. Akers may be in line for a successful 2022 campaign as a result.

When he burst for 171 yards on 29 rushes against the New England Patriots in 2020, Akers cemented his reputation. After that, he put on another incredible effort in the playoffs against the Seattle Seahawks, gaining 131 yards and a touchdown on 28 carries. Akers became one of the most promising young running back prospects in the game in an instant.

Akers missed the most of the 2021 season after tearing his ACL over the summer. No one is truly sure what to anticipate from Akers as he now gets ready for the 2022 season. Will he continue to amass 100-yard games whenever he pleases or will he seem as he did in the game against Tampa Bay Buccaneers.

Henderson, who performed like a foolproof RB1 (both as a runner and receiver) in fantasy football for most of the 2021 campaign.