Bubba Wallace attempted a three-wide pass over Kyle Larson and Kevin Harvick, which set off the collision. Wallace did not provide any room as Larson slid up the track in opposition to him.

Larson became enraged as a result and pushed Wallace’s Toyota into the wall, angering the 29-year-old American driver. Wallace then looked to purposely hook Larson as vengeance after bouncing back down the track and following his car to the apron.

Larson was sent spinning and into Bell’s path. Wallace soon exited his vehicle and began marching toward Larson, as seen in the video below.

Before he even approached Larson, Wallace was yelling and started pushing the smaller driver. Larson made an effort to veer away from him. 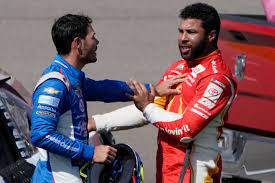 Wallace had driven a fast car in the first race of the third round of the playoffs, having led 29 laps. Larson was ousted last week, while Wallace was unable to advance.

When Larson attempted a three-wide pass, Kevin Harvick in the middle of the group dropped out, and Larson slid up the track in front of Wallace, the incident started.

Wallace refused to move aside for Larson, so Larson pushed Wallace’s Toyota into the wall with his Chevrolet.

Wallace then looked to purposely hook Larson as vengeance after bouncing back down the track and following his car to the apron. When Bell won last Sunday at Charlotte to secure an automatic slot into the race, that sent Larson tumbling into Bell’s path.

Christopher Bell, a member of the Toyota team, was injured during the race and was unable to continue. Heading into Sunday’s race at Homestead-Miami Speedway, Bell is currently last in the rankings among the playoff drivers still active (2:30 p.m. ET on NBC).

In his statement, Wallace also said, “I want to apologise to NASCAR and the fans, as well as Christopher Bell, Joe Gibbs Racing, and Toyota for putting them in a Playoffs situation that they did not deserve.”

NASCAR has said it will thoroughly examine the Wallace and Larson incident. Any fines may be assessed on Tuesday.

He participates in the NASCAR Cup Series full-time in the 23XI Racing Nos. 23 and 45 Toyota Camrys and the NASCAR Xfinity Series part-time in the Joe Gibbs Racing No. 18 Toyota Supra.