Antonio Tavaris Brown Sr. is an American football wide receiver who is currently a free agent. Growing up in Liberty City, Miami, Brown attended Miami Norland High School. He played college football at Central Michigan University, where he earned All-American honors as a punt returner in 2008 and 2009.

One of the most intriguing players to ever compete in the NFL is Antonio Brown. Even though doing things his way occasionally led him into problems, he has always done things his way.

Brown may have been one of the greatest wide receivers of all time if he had continued his habits in Pittsburgh, but he has since won a Super Bowl and is now collaborating with people like Kanye West at Donda Sports.

Although Brown has said he is finished playing in the NFL, there have been moments when he has refuted this claim.

Even though the season hasn’t even begun, we’re sure Brown is already missing the great moments that come with playing NFL football. 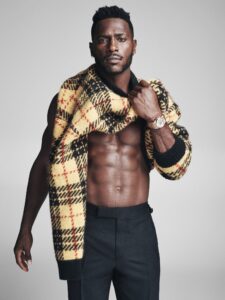 As the week goes on, the Antonio Brown issue becomes increasingly bizarre. Ava Louise, an Onlyfans model, claims that on the evening before Brown’s final game against the New York Jets, he sneaked her into the team hotel to have sex.

This is the most recent development regarding the much-maligned receiver.

Brown took off his jersey, shoulder pads, undershirt, and gloves before leaving the sideline. Brown has a long history of questionable behaviour on and off the field, including being accused of sexual assault by two women, one of whom said he had raped her.