Track cyclist Anna Maree Devenish Meares OAM is from Australia. She presently resides in Adelaide, South Australia, where the Adelaide Super-Drome serves as the home of the Australian Institute of Sport’s Track Cycling programme.

She divorced with her husband of nine years, Mark Chadwick, early in 2015.

2001’s 500m world junior champion, the rising At the 2002 Commonwealth Games in Manchester (GBR), Kerrie won gold in the 500-meter time trial, and Anna finished third in the individual sprint.

Meares enrolled in the Australian Institute of Sport in Adelaide at the age of 19, completing her education while achieving remarkable success on the world stage. 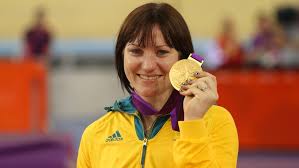 Following her victory in the 500m time trial at the world championships in Melbourne in 2004, she went on to win the same event at the Olympics in Athens, setting a new world record of 33.952 and becoming the first female rider to break the 34-second barrier. She made up for the disappointment of losing to Canada’s Lori-Ann Muenzer in the sprint event by qualifying with the fastest time in that event.

Olympic cyclist Anna Meares and her partner Nick Flyger had their first child. Having won two gold medals, Meares, 36, gave birth to her daughter on Monday.

She wrote on Instagram that becoming a mother was her greatest accomplishment and shared the baby’s name, Evelyn Bette Meares Flyger.