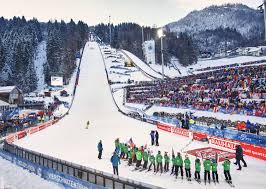 The qualification for the opening competition of the 70th Four Hills Tournament in Oberstdorf took place on December 28, 2021. Here, the Japanese Ryoyu Kobayashi prevailed in front of Karl Geiger from Germany and the two Norwegian Halvor Egner Granerud and Johann Andre Forfang .

The competition took place on December 29, 2021. Ryoyu Kobayashi was able to prevail just ahead of the two Norwegians Granerud and Robert Johansson.

After all four jumps, the points of the ski jumpers from all eight competition rounds are added up. The jumper with the highest number of points will be the overall winner of the tour.

A complete table will be added at the end of the Epiphany in Bischofshofen.The number of athletes that the nations are allowed to start depends on the World Cup results within one year before the start of the tour as well as on the results of the Continental Cup in Kuusamo .

The athletes look down 134 meters from the take-off table. With a direct view of the cemetery in the Wilten district of Innsbruck. This horror component does not keep them from top sporting performances: on the landmark of Innsbruck and the venue of the legendary Four Hills Tournament, the Bergisel ski jump.

Countless cheering fans and millions of viewers in front of the television watch the world’s top ski jumping stars on their breathtaking flights.

Oberstdorf – Four hills, two countries and the chance of a “Grand Slam”: The Four Hills Tournament is considered to be the majority of the ski jumping season in winter sports circles.

For the 70th time, jumpers from all over the world will be flying through the air at the Four Hills Tournament at the turn of the year from 2021 to 2022. I

n addition to the 2021/22 Biathlon World Cup and the 2022 Winter Olympics in Beijing, the Four Hills Tournament is one of the most important events for winter sports fans. Now the schedule for the tour has been set.